Talk about a simple, yet delicious dessert! I’ll give this one the prize.

BEST WITH FRESH SEASONAL BERRIES!  Strawberry season is upon us.  You can get very good berries in the stores… even better in the farmer’s markets… and even better if you grow them yourself or go to a u-pick farm and pick them yourself!  Strawberries bought outside of season lack the sweet, juicy flavors of high-season berries.  But also be aware that there are types of strawberries which ripen later in the summer.  These can often be found in your local farmer’s market.

I RECOMMEND ORGANIC BERRIES:  I like to know that my strawberries are either organic or that they are grown without pesticides.  The reason is little critters love strawberries too so pesticides are often sprayed directly on the berries, and do not wash off easily.  This is why they are listed #1 in the Dirty Dozen list… fruits and vegetables which should not be eaten unless they are organically grown.

MOSCATO D’ASTI is a sweet, sparkling, low-alcohol wine from the area of Asti in Piedmont. It is made from the Moscato (Muscat) grape and is wonderful for an apéritif or a “not too sweet” dessert wine. Pour it over some fresh sliced strawberries and top with whipped cream and anybody will be impressed!

A COUPLE OF TIPS:

Below is the recipe.  If you’d prefer the recipe in a PDF click here… Strawberries in Moscato Recipe

Buon appetito!  May God bless your table with good health and his abundant love! 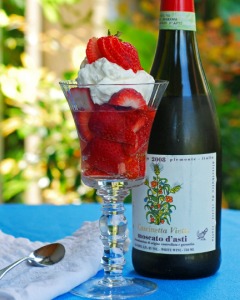 I love gelato!  At least I adore the gelato I have in Italy.  I have a strict personal policy… when in Italy, I must eat gelato every day!  And if I miss a day, I must have it twice the next day.  Now that is a rule I can live by.

I’ve always desired to have great gelato here at home, but until now I’d never had any as good as what I have had in Italy.  I’ve wondered if it is the magic of the place that makes it so good?  This may be partly true.  But I’ve also become convinced that nobody in my part of the world makes it as good.  This was true across the board… whether I purchased in a gelato shop, a grocery store, or an attempt to make it at home.  I’ve tried making gelato a few times and it never came out like the wonderful stuff I’ve had in Italy… until now! YES!

I took this recipe from a couple of different sources.  The custard base was adapted from the Best Recipe Italian Classics cookbook published by the editors of Cook’s Illustrated magazine.  These people always test their recipes thoroughly.  The pistachio cream recipe I got elsewhere, and when I put the two together, well it was like magic happened.

This base has be cooked ahead of time and thoroughly chilled before churning.  It takes a little time but is well worth the effort. There was a lot of science and testing behind the procedures and temperatures for cooking the custard.  I cannot explain all of those here but please follow them as carefully as you can.

A gelato maker would be ideal for churning this, but I used my Cuisinart ice cream maker and was very satisfied with the results. What is the difference you ask?  Well a gelato maker only mixes in about half as much air as an ice cream maker, giving a denser consistency.  I don’t yet have a gelato maker.  I hope to one of these days, but they cost over $200 so its hard to justify unless I know I’m going to use it frequently.

Gelato is often viewed as a healthy alternative to ice cream due to it’s lower calorie content. This is because gelato is generally made with whole milk, or even 2% milk rather than cream. The lower butterfat is one reason it has more flavor, partly because the flavors are not coated over by fat.

Gelato also has a greater density and therefore you can eat less quantity and still be satisfied. So for those who are watching their waistlines, take heart, gelato may soon become your new midnight snack! 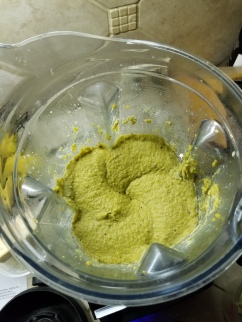 The other thing about gelato is the intensity of it’s flavors.  This recipe calls for making your own Pistachio Cream.  You can buy Pistachio Cream in some specialty grocery stores but this was easy to make.  It would not have been easy if I’d have had to shell all of the pistachios, but luckily I found raw, unsalted, shelled pistachios at my local Trader Joe’s.  With those in hand, it was easy.  I made mine in my blender, but I think it would be easier in a food processor.  I’ll find out next time.  Either way, get the cream as smooth as you can.  Then if you like you can add a few pistachios on top of the gelato when serving.

I highly recommend that you use an Instant Read Thermometer to keep track of
the temperature during the custard making.

Also, gelato is typically served at a slightly warmer temperature than ice cream. It is best served either right from the ice cream/gelato maker, or frozen for up to a few hours prior to serving. If you freeze it overnight, I suggest pulling it out a little while before serving. 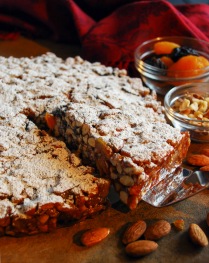 I grew up eating fruitcake.  And I actually like the stuff.  Not sure what that says about me… but yes, I’ve been accused of being one. My Mom would make fruitcakes and place them in the refrigerator, and cover them with a Brandy soaked cloth.  When I was young that was a bit strong for me but as I grew up I came to like it more and more.

Well the people of the ancient city of Siena in Tuscany have a dessert called Panforte. Though sometimes called an Italian fruitcake, it shares little resemblance to the version of fruit cake so many of you despise. I first made it when doing my cookbook and it was sooo good that of course it made the cut.

Panforte is a traditional dessert–really more of a gooey confectionary–originating from the ancient city of Siena many centuries ago, but now popular all over Italy. Panforte’s main ingredients are honey, sugar, almonds, hazelnuts, candied citrus peel. Some versions have dried (not candied) fruits. It also has many of the spices you would find in a traditional spice cake. I’ve made this for the holidays. Its so rich that its hard to eat a lot at once, but I couldn’t keep from snacking on it several times per day.

A fun option is to make a number of mini Panforte to give away as gifts. To do so, double the recipe and cook in a 9×13 baking pan. Then using an oiled circular cutter, cut into mini Panforte.  Wrap each in wax paper and tie with colored string. You then have all the yummy leftover scraps to eat yourself.

I have great news! My cook book, Frankie at Home in the Kitchen, is now available as an eBook on Amazon. It can be downloaded to any device… phone, tablet, laptop or desktop. The regular books have been sold out for a while now (except for a few being sold at gouger prices on Amazon), so this is a great option for those who didn’t have an opportunity to purchase one, or would like a digital copy. Here is the link…

Frankie at Home in the Kitchen eBook