I grew up eating fruitcake.  And I actually like the stuff.  Not sure what that says about me… but yes, I’ve been accused of being one. My Mom would make fruitcakes and place them in the refrigerator, and cover them with a Brandy soaked cloth.  When I was young that was a bit strong for me but as I grew up I came to like it more and more.

Well the people of the ancient city of Siena in Tuscany have a dessert called Panforte. Though sometimes called an Italian fruitcake, it shares little resemblance to the version of fruit cake so many of you despise. I first made it when doing my cookbook and it was sooo good that of course it made the cut. 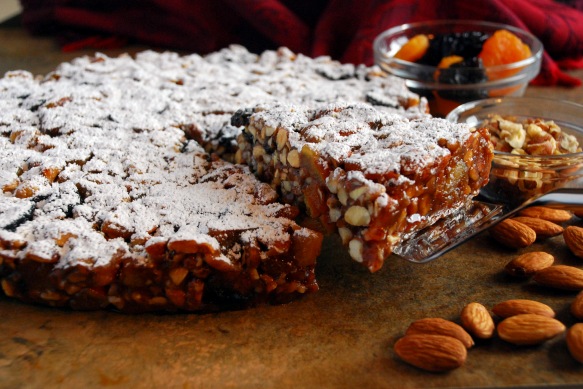 Panforte is a traditional dessert–really more of a gooey confectionary–originating from the ancient city of Siena many centuries ago, but now popular all over Italy. Panforte’s main ingredients are honey, sugar, almonds, hazelnuts, candied citrus peel. Some versions have dried (not candied) fruits. It also has many of the spices you would find in a traditional spice cake. I’ve made this for the holidays. Its so rich that its hard to eat a lot at once, but I couldn’t keep from snacking on it several times per day.

A fun option is to make a number of mini Panforte to give away as gifts. To do so, double the recipe and cook in a 9×13 baking pan. Then using an oiled circular cutter, cut into mini Panforte.  Wrap each in wax paper and tie with colored string. You then have all the yummy leftover scraps to eat yourself.